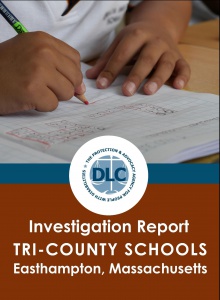 BOSTON, August 2, 2018 – The Disability Law Center (DLC) issues a Report today announcing the results of its abuse and neglect investigation at Tri-County Schools (TCS) in Easthampton, Massachusetts. DLC substantiated abuse and neglect at TCS. The school is closing for approximately a year in order to reassess and reopen the school’s operation with a focus on a trauma-informed care model.

TCS is a private, day special education school in Easthampton, Massachusetts run by a non-profit, Northeast Center for Youth & Families (NCYF) and approved by the Massachusetts Department of Elementary and Secondary Education. TCS has the capacity to serve up to 115 special education students, who primarily struggle with social, emotional and behavioral manifestations of their disabilities.

During the early spring of 2018, DLC received complaints regarding the treatment of students with disabilities at TCS. As part of its investigation, DLC reviewed three student records, viewed restraint video and interviewed 19 parents. DLC also reviewed records from local police, the Massachusetts Department of Children and Families (DCF), conducted a site visit and interviewed TCS administrators.

DLC also found TSC neglected students with disabilities by failing to provide a safe environment by not maintaining adequate numbers of trained staff, which resulted in the over-criminalization of disability-related behavior and the failure to properly implement effective social/emotional services and supports. For example:

“The pattern and practice of forcibly restraining and containing — and then arresting — students for disability-related behavior at a special education school is extremely troubling.” says Marlene Sallo, DLC’s Executive Director. “This treatment causes both physical harm and long-term psychological trauma.”

DLC supports TCS’ decision to close, reassess its operation and re-open with a trauma-informed care focus. In support of that effort, DLC seeks a remedial plan from TCS in advance to address these findings.